Determining casualites was not easy. The eact number of casualties suffered by the 62d is not known, but three different attempts were made to provide close estimates. New calculations made by J. David Hacker, professor at Binghamton University, that the war’s total dead numbered about 750,000, an estimate that’s 20 percent higher than the commonly cited figure of 620,000, suggests that the numbers listed here may be lower than they actually were.

Figures included in a Gettysburg Memorial volume indicate that among the 1600 volunteers who served in the 62d Pennsylvania that 241 were killed, 503 wounded, and 158 captured or missing in action, for an aggregate of 902 casualties, or approximately 56% of the regiment.

A list compiled by Frederick H. Dyer in 1908 indicates an even higher figure of 258 killed. Dyer does not list other casualties.

Colonel William Fox's Regimental Losses, which was written in 1888, has entirely different figures for the 62d Pennsylvania. Out of 1571 total enrolled, Fox indicates that 169 were killed. I don't know the source for Fox's figures beyond a statement in his preface regarding "courtesies extended by the Adjutant-Generals of the various State Military Bureaus, and the Adjutant-General's office at Washington," and his own "patient and conscientious labor of years," rather than information from official records.

The 62d was one of only 14 Union regiments with 17 or more officers who were killed or mortally wounded in battle.

If the regiment was full on 24 July 1861, it may have had 1000 to 1200 soldiers. Its total enrollment, including replacements, was approximately 1600. Before its first battle, the regiment had already lost many soldiers to typhoid fever and other diseases. By the start of the Gettysburg campaign, the regiment was reported to have 26 officers and 400 privates. More volunteers were added to the regiment after the military draft was reinstated by Congress in 1863. Before the Battle in the Wilderness, the regiment totaled 557, including officers and enlisted.

In comparison with the number of enlisted who were killed or mortally wounded, the number of officers killed appears small. However, as stated in the summary, the casualty rate for officers in the 62d was unusually high.

Casualties by Company and a Brief History,
from Fox's Regimental Losses in the American Civil War 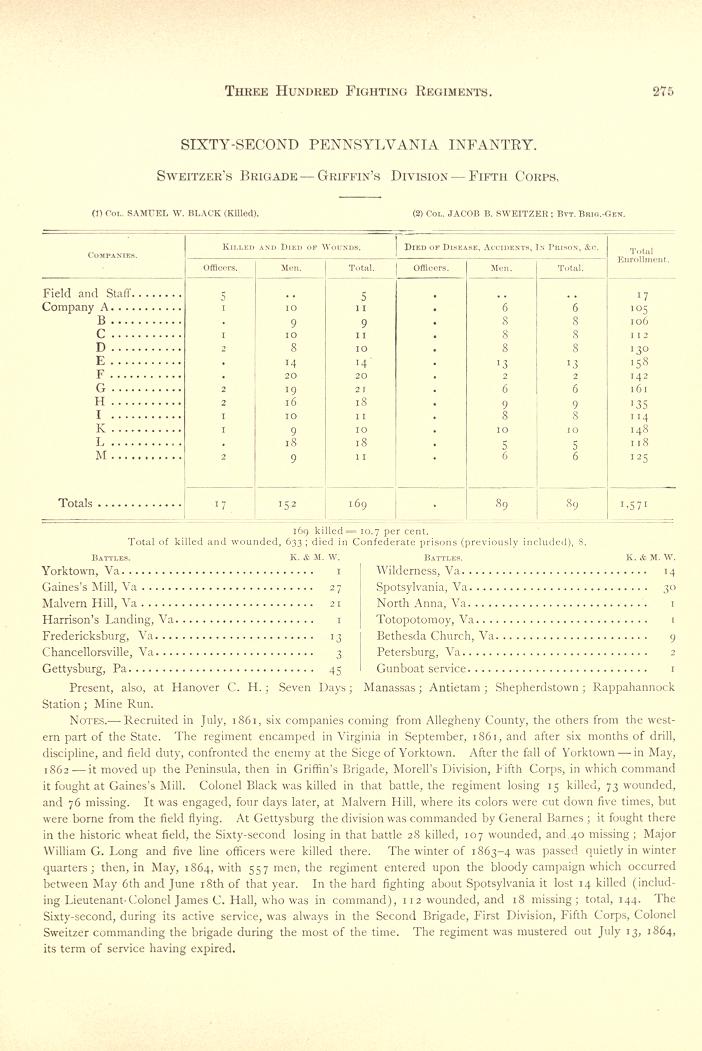 The Peninsular Campaign included, for the 62d, Yorktown, Mechanicsville, and the Seven Days Battles. In some of the battles the regiment was held in reserve or saw little action. Most of the 62d Pennsylvania's casualties occurred at the Battle at Gaines' Mill and Malvern Hill. Numbers from "Return of Casualties in the Army of the Potomac during the operations before Richmond, Va., June 25-July 2, 1862, inclusive" and "Return of Casualties in the Union forces at the battle of Gaines Mill, Va., June 27, 1862." Tables in The War of the Rebellion: a Compilation of the Official Records of the Union and Confederate Armies. Washington: Government Printing Office, 1880-1902.

Numbers from tables in The War of the Rebellion: a Compilation of the Official Records of the Union and Confederate Armies. Washington: Government Printing Office, 1880-1902. I have been unable to locate a return of casualties for the battle at Chancellorsville. There were 136 for the entire First Division.

Figures based on a transcript of a monument engraving at Gettysburg, and confirmed by tables in The War of the Rebellion: a Compilation of the Official Records of the Union and Confederate Armies. Washington: Government Printing Office, 1880-1902.

Return of Casualties, Campaign of Maneuvers (Mine Run) 27 November 1863.

The Return of Casualties for Rappahannock Station was none. Bates indicates that 7 were wounded. A table in The War of the Rebellion: a Compilation of the Official Records of the Union and Confederate Armies (Washington: Government Printing Office, 1880-1902) indicates that 7 were captured.

The Overland Campaign included, for the 62d, battles at The Wilderness, Spottsylvania Court House, North Anna, Totopotomoy, Bethesda Church, and Cold Harbor. In some of the battles the regiment was held in reserve or saw little action. Numbers from tables in The War of the Rebellion: a Compilation of the Official Records of the Union and Confederate Armies. Washington: Government Printing Office, 1880-1902.

The 62d's first casualties occurred before its first battle. The winter of 1861-62, while still in camp, a malignant form of camp fever (as typhoid was often called) prevailed. Malaria and other contagious diseases were also rampant. Described as "the model camp of the Army of the Potomac," Camp Bettie Black was also a healthier living space than some of its neighboring camps or locations that 62d had previously been assigned. A report of the Sanitary Commission published in the 25 June 1862 Pittsburgh Gazette, reviewed the conditions of several Western Pennsylvania regiments and found the Sixty-second "in the best condition of any we visited. Its sanitary condition being good, and its surgeons generally giving satisfaction, its hospital arrangements the best we visited in the advance." A correspondent from the Pittsburgh Gazette reported on 4 January 1862, after the regiment had moved to its new camp that the regiment was in good condition with its sick list "less than half what it was when they encamped by the pestilent Potomac." Nonetheless, during the early part of the winter much sickness prevailed in the regiment leading to many deaths. Only after the surgeon placed the camp under the strictest sanitary measures, did the disease abate. William Hays, of Company E, lamented, "a grate many Sick people in our ragiment with the favor and ague and Sam died with it." Fortunately for Hays, he survived not only this initial plague but the rest of the war, and was able to return home to marry and have 16 children.

According to Brian Burton's book about the Seven Days Battle, Extraordinary Circumstances (2001), Corporal James Lee Graham wrote a letter home to his wife Ellen on 16 June 1862 while he was serving as a steward in the division hospital after the Battle of Hanover Court House but before the Seven Days Battles, estimating that 25 percent of the army was sick.

A high percentage of deaths among the enlisted soldiers in the 62d Pennsylvania were caused by disease. Accurate statistics on deaths due to disease are difficult to determine. Colonel William Fox in The Chances of Being Hit in Battle (Century Magazine, May 1888), an analysis of battlefield casualties, lists for the 62d Pennsylvania 89 deaths due to disease, accident, or prison. This calculates to about 34%, using Fox's total figures. Fox chose only 23 "crack fighting units" to compare for this category, and he and more modern researchers estimate that for the Union army as a whole more than two thirds of all deaths were caused by disease. If Fox's numbers for the 62d are close to accurate, the regiment remained remarkably healthy.

More than fifty died before the first battle, based on Bates' records. One is known to have been an accident. Almost all of the others were likely victims of camp fever. Almost half of those died in October, within days after the regiment at their winter's quarters at Camp Bettie Black. Not only enlisted soldiers suffered. The Pittsburgh Gazette correspondent reported that Col. Thomas Espy had been sick for some ten weeks.

The most common deadly diseases were (not in order) chronic diarrhea, dysentery, typhoid, malaria, pneumonia, measles, chickenpox, mumps, and whooping cough. And if the diseases didn't kill them, it made their lives pretty miserable. Almost no one escaped diarrhea and dysentery, and few avoided malaria.

It was not widely reported, but there must have been many cases of debilitating stress and fatigue. Major James W. Patterson resigned because of "ill health" on 10 August 1862, just before the end of the Peninsular Campaign. Details of the illness indicate he suffered from “general debility and partial hemiplegia [paralysis on one side of the body]” and was "physically incapable of enduring the fatigue incident to the service.” Officers could resign; it wasn't an option for privates.

The 62d Pennsylvania Volunteers were employed by Charles S. Tripler, Medical Director of the Army of the Potomac, as guinea pigs in his attempt to determine an experimental drug for malaria. The experimental drug in this case was the "prophylactic use of quinine and whisky." The surgeon of the 62d was able to report that two companies who "used it faithfully for two weeks presented a sick report of only four men." James Kerr was the regiment's Surgeon for the full three year term, which in itself is some evidence that he was a creditable practitioner.

One likely reason the deaths due to disease was as low as it was in the 62d Pennsylvania was not the use of medicinal whisky, but simply because so many hailed from an urban center. City dwellers were more likely to have been previously vaccinated and would have already built up an immunity to common contagious diseases. They might have been in the habit of practicing better personal sanitation and hygiene.

The Peninsular Campaign was particularly unhealthy for soldiers. George L. Kilmer, from Company D of the 27th New York Volunteers, in a letter to Century Magazine years later seemed to cover most of the causes: "The unusual strain imposed upon the men, the malarial character of the region around Richmond, the lack of proper nourishment, the want of rest, combined with the excitement of the change of base, and the midsummer heat prostrated great numbers." Confederate General D. H. Hill commented more succinctly, "Truly, the Chickahominy swamps were fatal to the Federal forces."

Infection after a wound, treated or untreated, was as likely to cause death as the wound itself. Because bacteriology and the modern concept of germs did not exist, antiseptics were not used, and instruments, materials, and equipment were not sterilized or disinfected. However, surgeons were not totally ignorant. Doctors were well aware of the relationship between cleanliness and infection. Unfortunately, with little support for equipment or supplies, they worked under primitive conditions, worked in blood- and pus-stained coats, and washed hands, sponges, dressings, and instruments in basins of water. It became almost impossible to obtain a good supply of uncontaminated water even at the beginning of the process.

One of Samuel J. Alexander's letters gives some insight on how disease and disability were considered by the volunteers. He remained with his regiment despite the surgeon's orders to the contrary, and in a letter to his mother dated 3 May 1863 explained "if I had of Staid behind I would have been called a coward." He regretted his decision after he became seriously ill and did not recover for weeks just because "my foolish Pride kept me in the ranks."

There is no record of how many volunteers from the 62d died in prison, but it could have been high. Belle Isle was the prison many captured at Gettysburg were sent to. Although it did not have the reputation of Andersonville, Belle Isle offered prisoners a daily ration of eight ounces of bread and one ounce of meat, cooked without salt. Disease was likely rampant.

Back to the main Pennsylvania 62d Infantry Regiment page?