I hesitated before creating yet another Titanic Web site, but after I saw the movie Titanic [that tells you how long this page has been around], I was inspired to finish up some research I had started quite some time before. I was curious about the demographics of the passengers and crew of the Titanic -- who perished, who survived, and who occupied which lifeboats. How gravely was the tragedy enhanced by gender, class distinction, and prejudice?

On this site I have compiled numbers, comparing several different sources. The numbers make it all too clear that a rule of First Class First far outweighed the principle of Women and Children First. In addition to simply compiling numbers, however, I have included some notes and analysis and share the sources I used to compile the data.


The nationality numbers were adapted from lists and raw data compiled by Hermann Söldner. Note: the numbers on this chart do not match the totals on the two tables above. Although I can account for some of the discrepancies (for example, I think he included the musicians among the British Second Class passengers, but I did not), I do not have enough information about his sources to be able to square his numbers with my own.


NOTES ON THE TABLES ABOVE

DISCUSSION OF THE TABLES ABOVE

To me, a non-statistician, the tables above show significant indications of class discrimination. Evidence of numbers and testimony have proven that only on one side of the Titanic did the rule "Women and children first," apply. What becomes even more clear when looking at the numbers is that a more important concept of the day was "First Class first."

RESOURCES WITH TITANIC FACTS AND STATISTICS

RESOURCES USED FOR CALCULATING THE TABLES:

There were earlier efforts attempted to compile passenger names and information, as well:


All photographs used on this page are in the public domain. The animated illustration at the top of the page showing the sinking of the Titanic is based on the following six sketches of the sinking drawn by Jack Thayer, a 17-year old surviver, who also drew them while on board the Carpathian on April 15, probably not long after he came aboard. His sketches were first published to illustrate an account he wrote that was included as a chapter in Sinking of the Titanic and Great Sea Disasters - As Told by First Hand Account of Survivors and Initial Investigations edited by Logan Marshall, was published in 1912 by several publishers, including The International Bible House, which was my source. Thayer controversially showed the Titanic breaking in two. This fact was not widely believed until after Robert Ballard's underwater team proved him to be right in 1985. 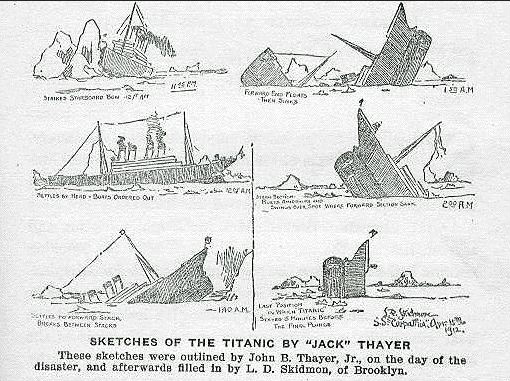 This page maintained by John R. Henderson (jrhenderson9 @ gmail.com).
I am a retired librarian who created this page when working at Ithaca College, Ithaca, NY.
First created on 6 June 1998. Links last checked on 26 January 2023.
URL: http://www.icyousee.org/titanic.html