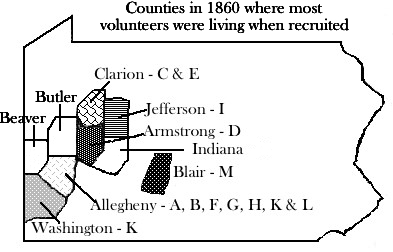 The regiment appears to be unusually heterogeneous -- for its time, at least. Farm hands who had never seen a city were joined together with factory workers who had never before left the city. Native-born and immigrants both were welcomed into the regiment. Catholics fought along side Protestants and non-Christians.

Six of the companies were principally filled with volunteers from Allegheny County. Another company was composed of Allegheny and Washington county residents. The other five companies hailed from Armstrong, Clarion, Jefferson, and Blair counties. At the time, Allegheny County, composed of three cities, surrounded by farmland, had a population of not quite 180,000; that figure was just about equal to the populations of the all other counties combined. Washington County, according to the 1860 census had just under 50,000, and Jefferson County was the smallest with under 20,000. Beaver, Butler, and Indiana counties supplied a considerable number of volunteers, as well, and Lawrence, Mercer, and Venango counties contributed a few. There were Pennsylvanians in the regiment from beyond the western part of the state, and there were a sizeable number of the volunteers (though less then 5 percent) from out of state, especially Ohio (especially from Liverpool), Virginia (from the part of the state that soon would become West Virginia), and New York State. Several who had been born in Western Pennsylvania, but were living elsewhere, returned to their hometown to enlist.

An important distinction for the 62d was its mix of ethnic groups. There is certainly an abundance of English and Scottish names in the rosters, but there are also many Irish, German, Dutch, and French surnames. At least one soldier, Harvey Koontz or Coonce, according to his 1860 Census listing, was a mulatto. A large number of the volunteers had not been born in America, and good many had only been in the country a few years when they stepped forward to volunteer.

The most common occupations of volunteers from Pittsburgh, Birmingham, and Allegheny City were glass workers, boatmen, rivermen, miners, and iron workers. There were no steelworkers. If that sounds odd, you should know that the steel industry was still in its infancy and Andrew Carnegie was more than a decade away from building his first steel plant. Among the iron workers, those working in the foundries producing cannons and other weapons and ammunition probably did not join the regiment, while many volunteers had worked in nail factories and rolling mills. In 1860, glass was still the biggest industry in Allegheny County, and Birmingham was the glass center of America at the time with over 75 glass factories. Glass industry jobs included glass blowers, moulders, cutters, and packers. For several occupations, I am not sure if the volunteer had worked in iron or glass. Rollers could have been employees of iron rolling mills. Puddlers either worked with molten iron or stirred molten glass with rods in furnaces. Master teasers were in charge of regulating the temperature of the furnaces in either iron or glass factories. Farmers, lumbermen, miners, and carpenters were the most common occupations of the rural counties, but a considerable number of farmers lived in Allegheny County as well. Other occupations included laborers, blacksmiths, butchers, bakers, teamsters and wagoners, both brick makers and brick layers, clerks, and merchants. In addition to many shoe and boot makers and boat builders were a few cigar makers, a watchmaker, a whip maker, an axe maker, an axe varnisher, an axe polisher, a hoe grinder, and several wagon makers. There were a couple of car builders, but I don't know what kind of cars they might have built, perhaps mine vehicles. One sergeant in Company M had been a "Tel. Operator." Many in the regiment were school boys, and there were a few law students and several teachers. There was one artist and several painters, but the latter were probably not the artistic kind. At least one doctor volunteered not as a surgeon but as a simple private. A high percentage of the volunteers had "laborer" listed as his occupation with no indication of the trade or industry he labored in. If any were unemployed, the records do not so indicate.

Colonel Black was joined by other lawyers and aspiring politicians and other professionals among the ranks of the officers. At least a few called themselves Gentlemen. However, there were many officers who were carpenters, clerks, hotel keepers, and farmers. If a majority of the 62d were "of the Democratic faith," substantial numbers of the volunteers, especially those from rural counties, were probably Republicans. Fanatical prohibitionists joined those about whom we might say favored more than an occasional nip. Some, of course, shared a bit in common with both camps. Jake Shenkel, a drummer from Company L, in his war diary, records both attending numerous Sunday services and prayer meetings and getting "three sheets to the wind" on just as many occasions.

In the 62d Pennsylvania, unlike many other regiments, was very ecumenical. Company H was largely filled with members from the Bethel Park Presbyterian Church, while other companies were predominantly Catholic. Catholics, Presbyterians, as well as Lutherans, Episcopalians, other protestants, Free Thinkers, and Jews, fought side by side. One indication of this harmony comes from a statement about the 62d made from soldiers in the Ninth Massachusetts regiment that was primarily Irish Catholic. The two regiments were particularly attached by ties of strong friendship that continued throughout their entire service. The regimental history notes that "They [the 62d] joined in our little festivities and we engaged in theirs. They participated in our celebrations on Saint Patrick's day with as much zest as "those to the manner born." It was thus we went through the hardships of our soldier life." I don't know what to make of the fact that two chaplains quit, and the regiment was without a chaplain for most of its service. In the History of the Newspapers of Beaver County, Pennsylvania by Francis Smith Reader (1905), there is a note that Smith Curtis, who was born and educated in New York State, was ordained a minister in 1861 and "in 1862 was elected Chaplain of the 62d Pennsylvania Volunteers, but was not permitted to serve." No further explanation is provided. He later left the ministry and became a newspaper publisher.

The 62d possibly had a few Jewish officers. If so it would have been one of only a few regiments, not primarily Jewish, that included Jewish officers. Three books, including Isaac Markens' self-published Hebrews in America (1888), Henry Samuel Morais' The Jews of Philadelphia, and Simon Wolf's The American Jew as Patriot, Soldier, and Citizen (1895), list three Jewish officers in the 62d Pennsylvania: Captain Gremitz (no first name) and a Sergeants Emanuel Myers and Cohen (no first name). It is likely that the later books simply repeated information from the first, however, and are not independent sources. All names are listed without company information, and unfortunately I can find no matches for them in roster lists. The closest name to Gremitz I can find is Captain Detrick Gruntz of Company L. There is a Sergeant Myers in Company G, but his name is listed Jacob Myers. I can find no Sergeant Cohen, but there is a Sergeant Milton C. Goheen in Company C. The Goheen family was Presbyterian, according to a Goheen family genealogist who contacted me, so my best guess was disproved. The claim by Morais that the officers were from Philadelphia may indicate the number of the regiment was mis-transcribed. Jules Cohen served as an assistant surgeon [surg not serg], for the 26th Pennsylvania Infantry, a Philadelphia regiment. Unfortunately, I can't uncover any captains there with names similar to Gremitz. I have nothing closer than a Captain William L. Grubb. I find no one named Myers, Myer, Meyers, Meyer, Mayer, or any other variations on that name serving as sergeant in the 26th. Five men named Emmanuel Myers served in Pennsylvania regiments, but none are listed as anything but privates, and none served in either the 62d or the 26th. Although I have doubts in general about claims of Jewish officers in the 62d, I find the possibility intriguing.

In other ways the regiment was probably very typical. Certainly the regiment included both hard-workers and law abiders as well as rascals, scoundrels, shirkers, and outright thieves and pickpockets. Brothers, cousins, and other family members served together. There were a few fathers and sons serving in the same company. Sergeant William Hagerson signed up with his son Asa to join Company D. Also in Company D, Corporal Wesley K. Dillon was the son of Reuben Dillon a private. Wesley was only 15 when he joined. There were were a few soldiers listed as 14 years old when they mustered in, and some who may have been that age or younger whose age was not listed or was listed differently. George Snyder of Company B listed his age at enrollment as 18, but he was discharged by an order of the War Department for being a minor. George W. Freeman of Company E, was officially 14, and census records confirm his age. Conrad Dittmere, a musician in Company B who deserted (date unknown), was listed as 14 when he mustered in, but census records indicate he might actually have been 6. I wish I could find more about him. The vast majority of privates were aged 18 to 25, but many were in their thirties and more than a handful over 40. Of the enlisted soldiers, the oldest I have found so far was Thomas A. Work, of Company E, who mustered in at age 51. John Hauch of Company F was listed as 45, but according to the 1870 Census would actually have been 50 at the time when he mustered in with his son Lewis, who may not have been 16, even though his age was listed as 19. John N. Hauch was discharged for "S.C. of D. & old age." The personal information is missing from Civil War Veterans' Card File, 1861-1866 for Bonaparte Hardin, but his age may have been 59 when he mustered in — there is only one Bonaparte Hardin, including variations of spelling, from Pennsylvania or other northern states, in each of several census records leading up to the Civil War. I have looked up more than half of the volunteers in the Civil War Veterans' Card File, 1861-1866, but have a lot more to go, so I may find someone even older. Because of the omissions, inaccuracies (some of which were purposeful), we may never know who the youngest and oldest really were.

Back to the main Pennsylvania 62d Infantry Regiment page?

This page authored and maintained by John R. Henderson (jhenderson @ icyousee . org), Lodi, NY.
Last modified: 24 January 2013, 150 years after the 62d Pennsylvania took part in Burnside's ill-fated "Mud March."
The Sixty Second Pennsylvania Monument, pictured at the top of the page, was dedicated at Gettysburg on 11 September 1889. The image was printed in the book, Pennsylvania at Gettysburg, Ceremonies at the Dedication of the Monuments, published in 1904.
URL: http://www.icyousee.org/pa62d/demographics.html